Back in March, I ran into a couple of blokes in an ATM vestibule at the
corner of 24th Street and 7th Avenue in Manhattan.

I say “blokes” because both men were visiting from England. One of them,
Jethro “Jeff” Wood, is a tattoo artist and considerably inked. His pal, Sam, was likewise decorated.

I posted photos of some of their work on my blog Tattoosday here.

But I held something back from the post. Of course, both men had Knuckle Tattoos.

First off we have Jeff’s “COSY” which is the Anglicized version of “cozy”: 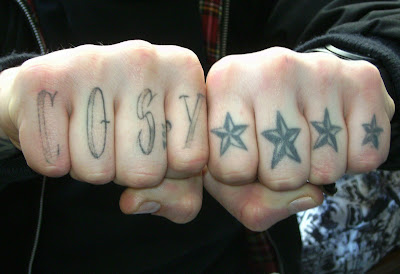 Why “COSY”? Because, Jeff said with a gleam in his eye, “My bird loves
being cosy”. By bird, of course, he did not mean his parakeet, but his
girl. I’d elaborate further, but I don’t want to have to spell everything
out, okay?

Next was Jeff’s friend Sam, who sported these knuckles: 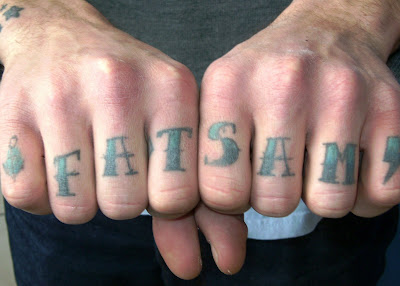 “Why FAT SAM?” I asked. He just smiled, patted his small (by American
standards) beer belly and said it was because he was so fat!

It was a treat meeting these two guys and even more fun talking to them about their tattoos.

Thanks to Jeff and Sam for sharing their digital ink here with us on
KnuckleTattoos.com!

I stopped by Studio Enigma in Bay Ridge, Brooklyn, which opened up last summer as Gotham City Tattoo, just to introduce myself and promote my blog, Tattoosday.

I was chatting with Bill Blood, one of the artists, and noticed he had some cool knuckle lettering.

After telling him about the site, he agreed to share his ink here: 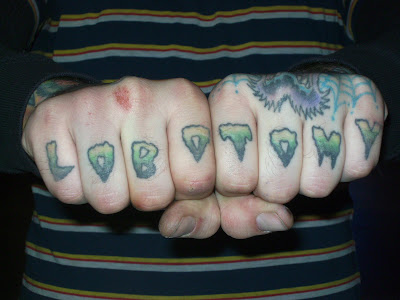 The letters, of course, spell out the word “LOBOTOMY,” the first time I have seen that combination on knuckles. The effect is enhanced by the Gothic font, which is similar to the lettering in the Misfits logo.

Bill started “scratching” back in 1998, and has been professionally tattooing for about seven years.

He likes the word, the way it sounds, the way it looks, the way it reads. He once played guitar in a band called “Chainsaw Lobotomy,” although Bill says that the coincidence with the ink ends there.

In all honesty, this piece represents how creativity can really transform knuckle tattoos into something memorable. The fact that his friend Jason inked these in such a cool font, reminiscent of the horror genre, and used a blend of yellow and green ink to make the knuckles “pop,” shows that Bill put some serious thought into these digits.

Thanks to Bill for sharing these cool knuckle tattoos! 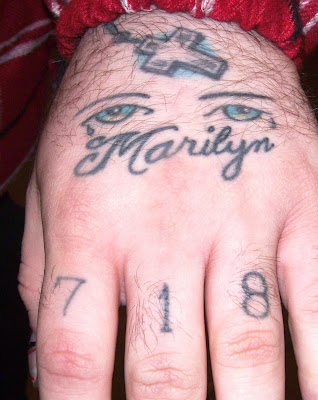 I spotted these lucky knuckles in Penn Station on Liz, who was waiting for a train during rush hour:

She likes the symbolism of the four card suits which serves to remind her that “life is a gamble”. These are on her right hand. Her left hand is still knuckle tattoo-free.

These were inked at Wyld Chyld Tattoo in Merrick, New York.

Check out one of her other tattoos over on Tattoosday.

Thanks to Liz for sharing these with us here on KnuckleTattoos.com!

Thanks to Nathan for allowing me to contribute directly to KnuckleTattoos.com!

I wanted to share an interesting story involving knuckle tattoos that appeared originally, an an expanded form, here on Tattoosday.

In early October,  I met Joel, a writer and a marketing director for an artist management and development company.

Joel couldn’t tell me how many tattoos he has (he has that many), but he did share two of them with me, one of which appears across four of his knuckles. 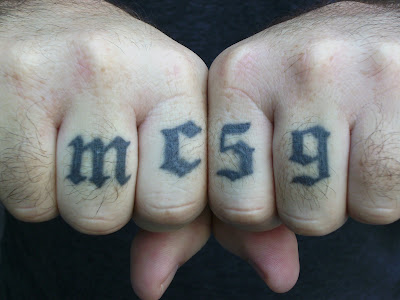 It’s an interesting and unusual take on the knuckle tattoo. Rather than the 4×4 knuckle piece, it’s a 2×2, with the letters “M” and “C” on the right hand and the numbers “5” and “9” on the left. When the fists come together, the MC 59 display, representing Mike Conley and the year 1959, when Mike was born. 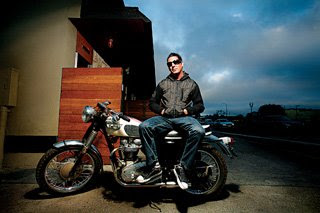 Joel described Mike as his best friend, who died tragically in February of this year after falling and hitting his head in a parking lot of a Chicago motel. Mike introduced Joel to the work of Charles Bukowski and Jack Kerouac, and to the music of Miles Davis and John Coltrane. He was the owner of The Avalon Bar in Costa Mesa, California. I could see the sadness in the eyes of Joel, as he recalled the friend that was taken from life
too soon. Joel said “I’m never gonna be over it.”

This was inked by Hek at HB Tattoo in Huntington Beach.

I learned later, by visiting the Mike Conley Family Memorial Fund website, that Mike was a founding member of the Southern California punk band M.I.A. (Not to be confused with the hip hop artist of the same name.)

I encourage folks to visit the website and, if so moved, to make a donation. There are links to some nice articles about Mike and his influence on the music scene.

Once again, I’d like to thank Joel for his contribution to Tattoosday and, subsequently, KnuckleTattoos.com.

I look forward to contributing more knuckle art, freshly photographed, from the streets of New York City in the future.